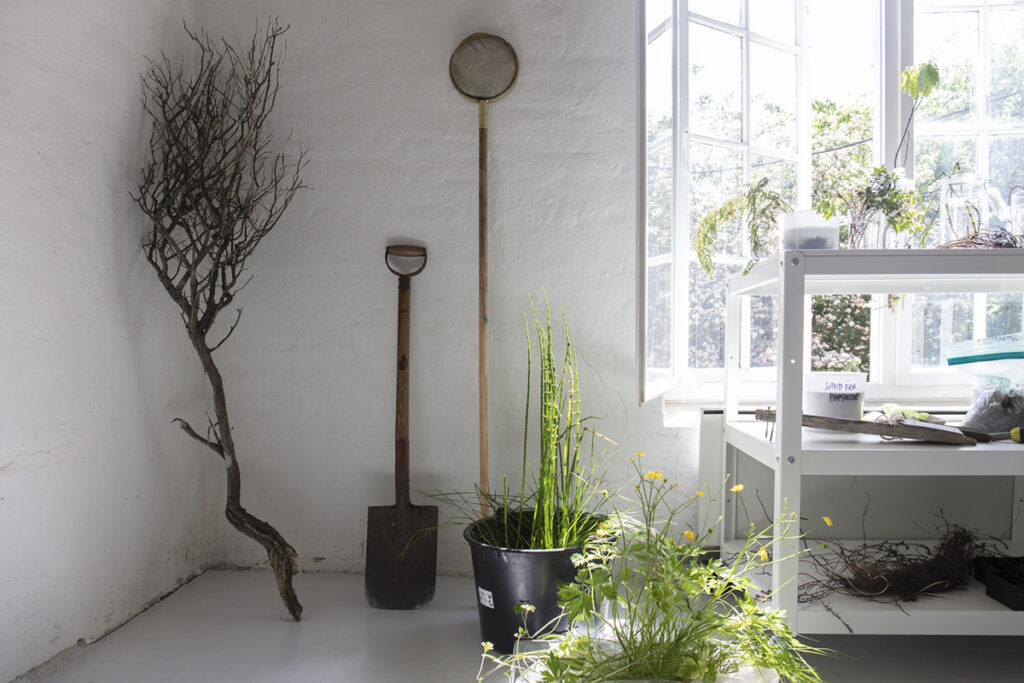 In the summer of 2021, I enjoyed a residency at Bruunshaab Gl. Papfabrik, located just outside the town of Viborg in rural Denmark. Inside the former paper mill, which now functions as a factory and museum, is the art gallery DRIFTSKONTORET, where I showed the artworks I created during my residency. DRIFTSKONTORET is an independent […] 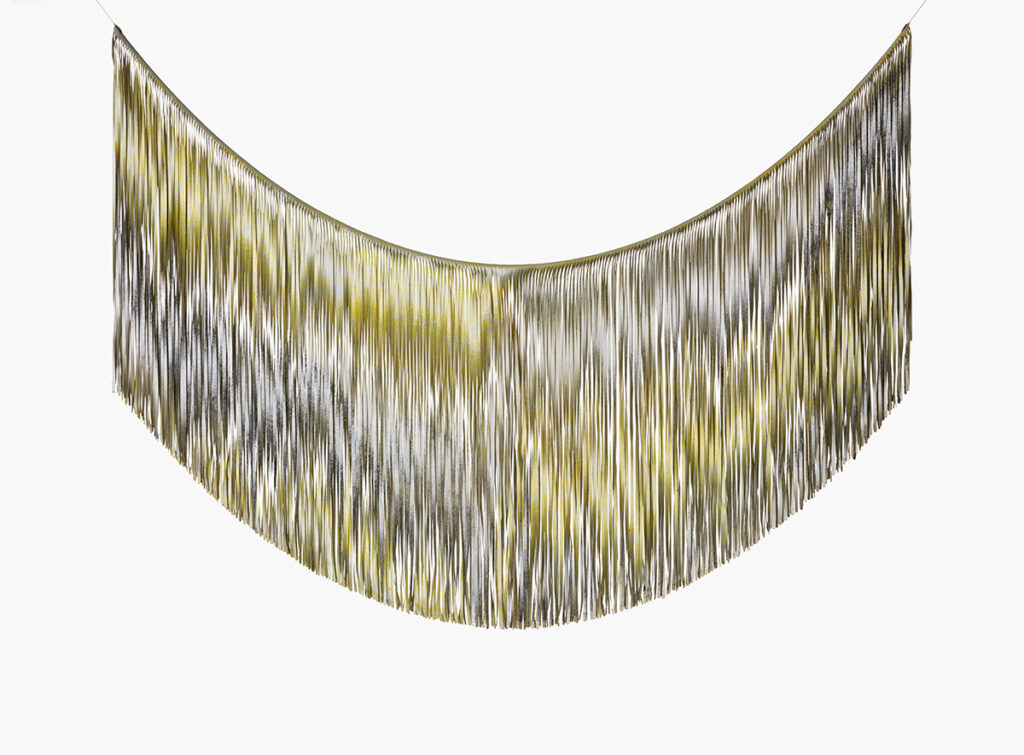 Grethe Wittrock is a “Nordic Cool” artist ― inventive and audacious yet balanced and restrained. Her unique commentary on our fragile eco-system is rooted in her Danish heritage leavened with experiences from her global travels. Blue is her color of choice, and in pursuit of deeper knowledge of blue, Wittrock studied with master dyer Shihoko […] 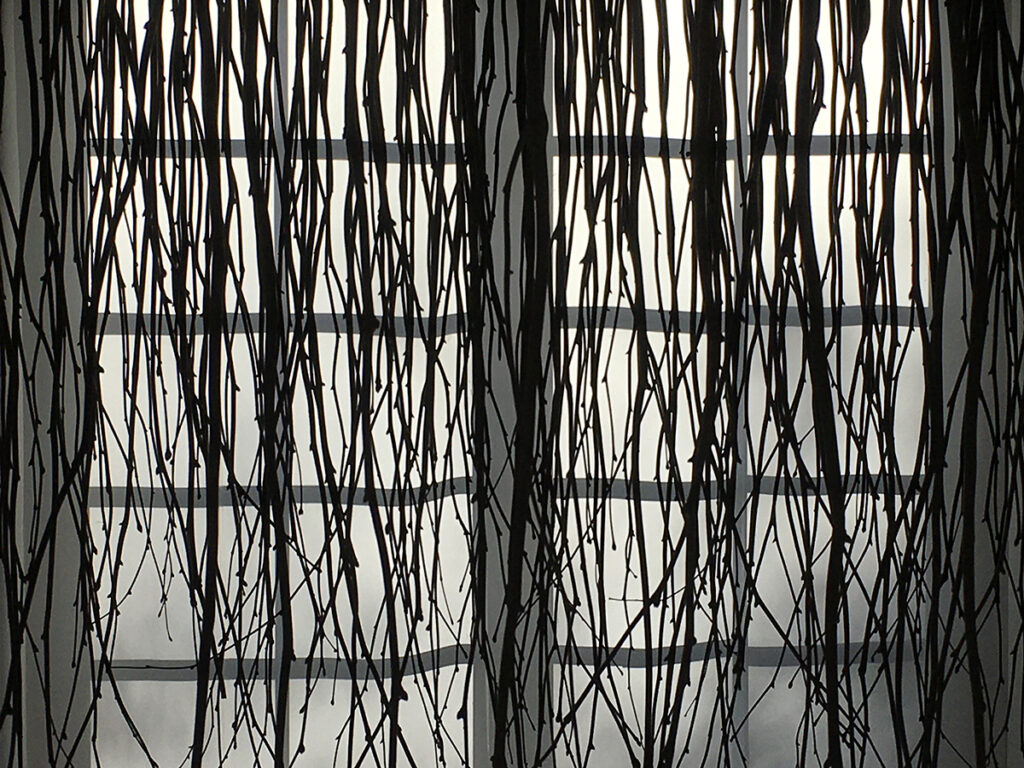 For a year, I was the artist-in-residence at DYREHAVEHUSET a studio located in a forest about 70 kilometers outside of Copenhagen. During the residence – as I worked surrounded by blooming trees and sprouting vegetation – every day felt like bathing in chlorophyll, as I watched the forest change its colors as the seasons passed. The […] 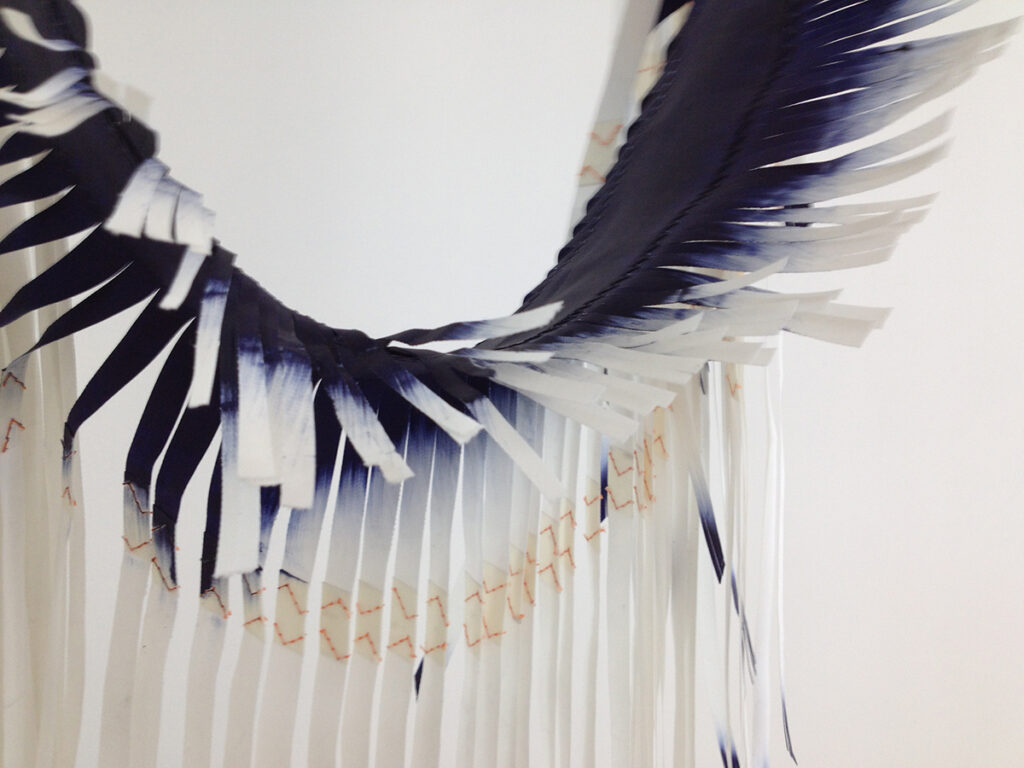 In her exhibition Nordic Currents, Wittrock articulates both the pristine beauty of her native Denmark and the northern climate that has long challenged resident species, both man and beast. Her most recent sculptural installation consists of bird-like constructions made from ships’ sails sourced by Wittrock from Danish yachtsmen. Her use of reclaimed material in this […] 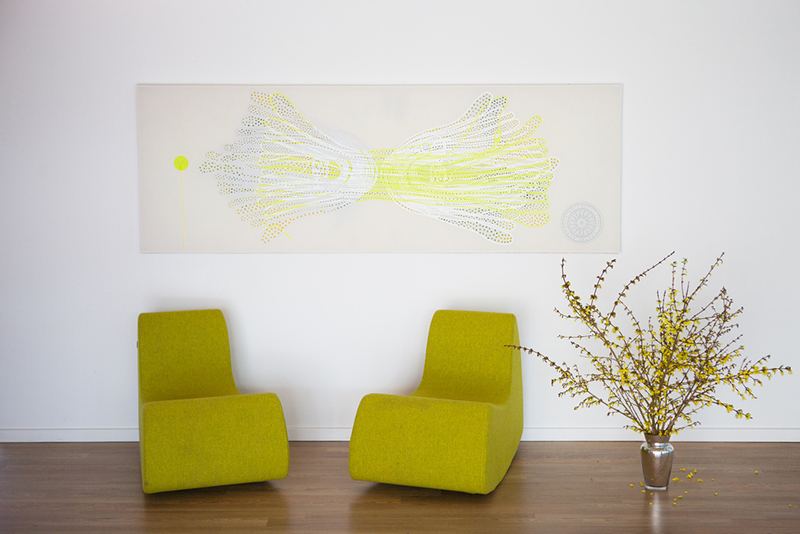 In 2013, I won a competition to decorate the hospice “Søholm” in the city of Aarhus, Denmark. A hospice is a special place, where the patients wants the most dignified, serene and beautiful place to spend their last days of their life. Thus, I worked both aesthetically and aurally to make the place feel homier […] 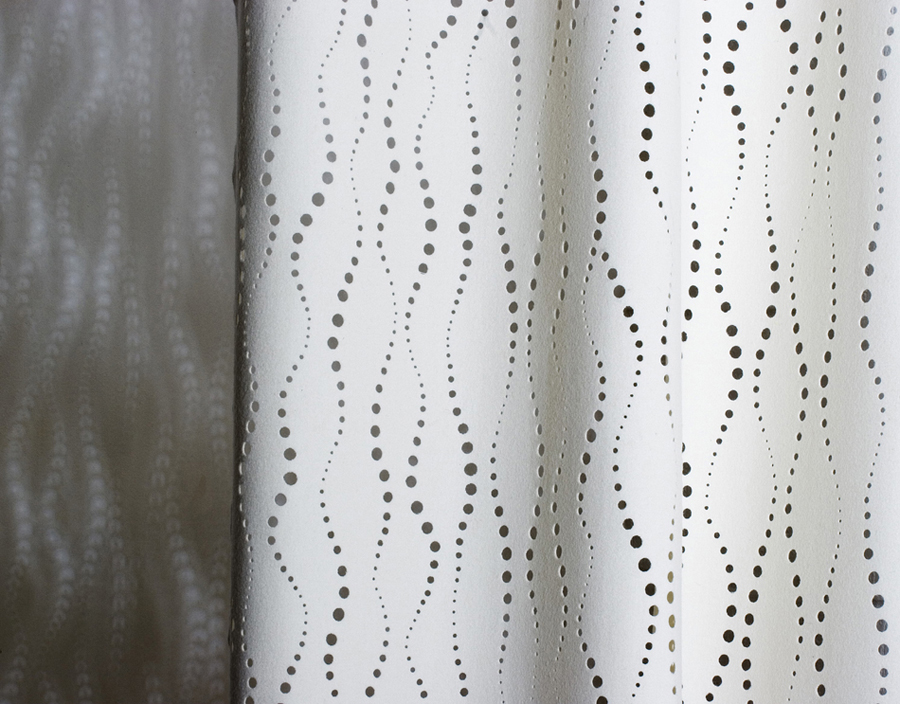 Known for her distinctive style and individualistic textiles, artist and designer Grethe Wittrock is to Danish textiles what Arne Jacobsen was to furniture. After finishing her studies at the Danish Design School, Wittrock studied fine art at Kyoto Seika University in Japan. Wittrock´s works has been exhibited worldwide, in cultural capitals such as London, Paris, […] 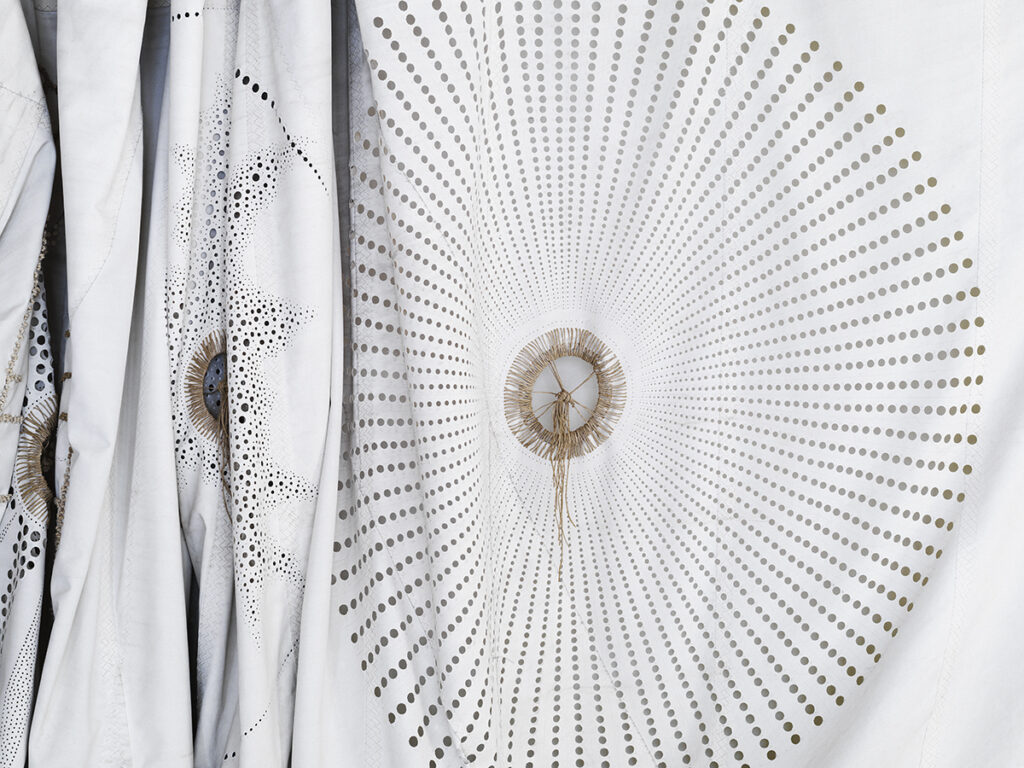 Georg Stage Sail Art Project Grethe Wittrock used a residence at the Danish Art workshops in Copenhagen to create large-scale works with an expression that is simultaneously rough and poetic. The material is discarded weather-beaten sails donated by First Officer Helle Barner Jespersen from the Danish training ship Georg Stage, which is moored at Holmen […] 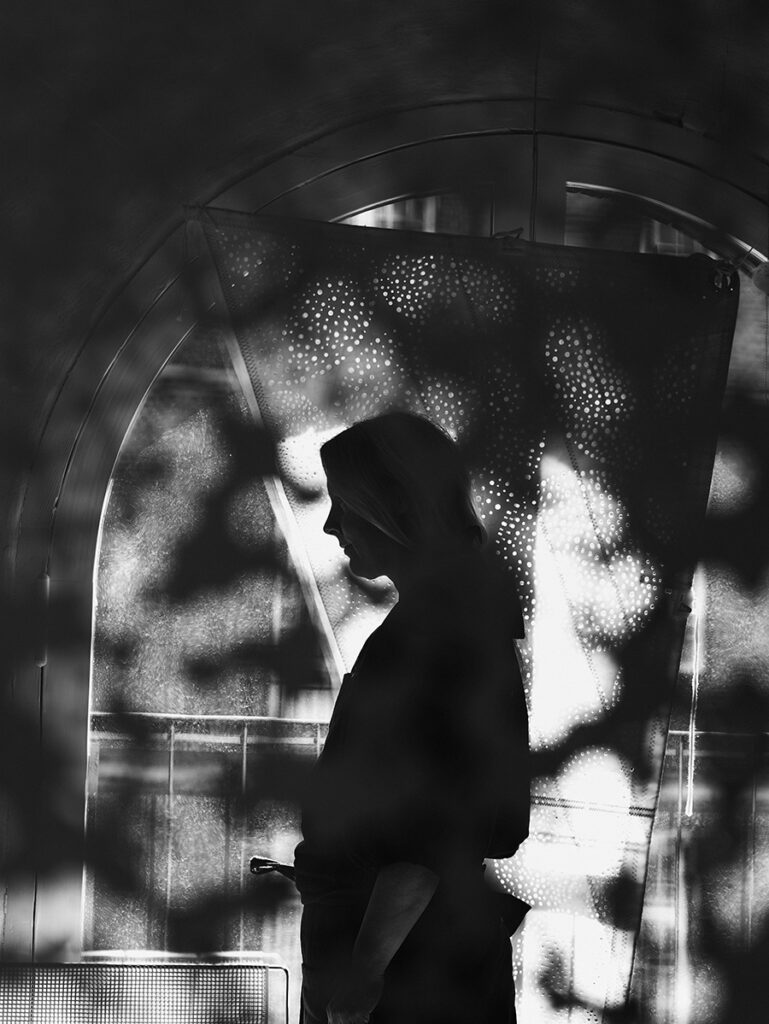 Grethe Wittrock used a residence at the Danish Art workshops in Copenhagen to create large-scale works with an expression that is simultaneously rough and poetic. The material is discarded weather-beaten sails donated by First Officer Helle Barner Jespersen from the Danish training ship Georg Stage, which is moored at Holmen in Copenhagen in between cruises. […] 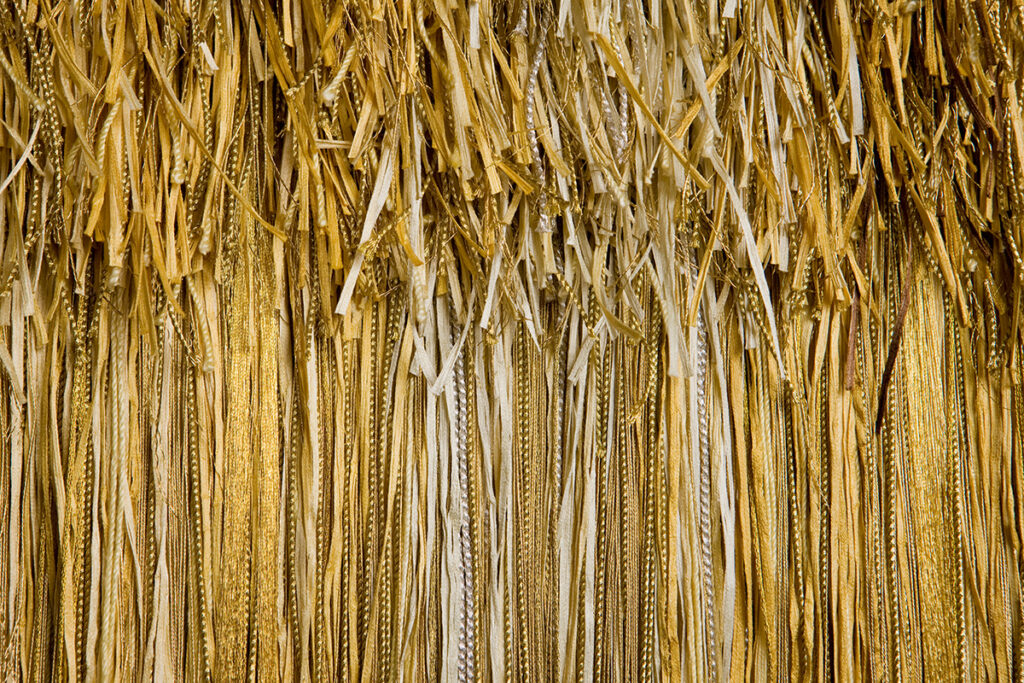 Grethe Wittrock’s work Gold Reserves (Copenhagen-New York 1939-49) is a large wall mounted sculpture, made of thousands of gold and silk threads knotted together on a steel plate. The work was inspired by the little known historical fact that the Danish national gold reserves were shipped clandestinely to New York City just before World War […] 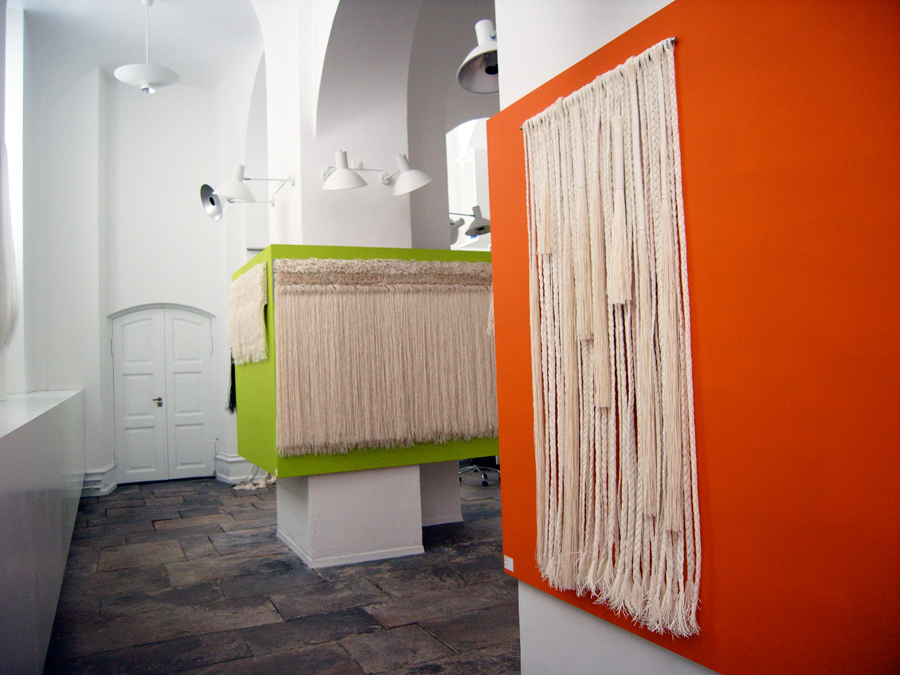 Grethe Wittrock creates expressions of sensuality in works that leave the beholder affected by their tactility and accumulation of yarns. Some of her banners and wall hangings consist of thousands of hand-knitted strings, and their expression is closely embedded in the process of creating the object. Grethe Wittrock repeats the knotting or braiding process over […]